With a deck mounted camera, capturing more than 80,000 images, JeffHK produced an entrancing video of his journey to ports-of-call in the “Red Sea passing the Indian Ocean to Port of Colombo, then through Malacca Strait into Singapore, and then finally SouthEast China Sea arriving at Hong Kong.” There have been many attempts to portray graphically the magnitude of our oceans relative to the planet’s puny landmass. JeffHK’s video surpasses most, in ten minutes, portraying 30 days at sea, covering but a fraction of our water world. I had the opportunity to ask him about his journey:

EarthDesk: Now that the trip has been behind you for a while, does the video capture what you had hoped? 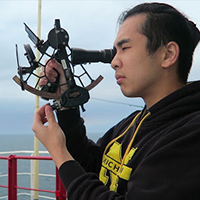 JeffHK: Yes. I intended to capture the beauty of the night sky at sea, where away from any sources of light pollution and thousands of miles from nearest civilization, the galaxy almost seems like CGI straight from a fictional sci-fi movie or video game. (if you allow your eyes to adjust, waiting about 5 minutes).

EarthDesk: So far, it has been viewed more than 2 ½ million times and received more than 7,500 comments. What is your reaction?

JeffHK: From the comments, its mind boggling to see so many city dwellers don’t realize there could be such sights…actually, driving 1-2 hours from most cities are enough to have a clear view of the galaxy.

EarthDesk: I came away with a vivid reminder we live on a water world, in part because you only touched a fraction of it. Was that your intent?

JeffHK: I think it communicates somewhat that we live in a water world, only if the audience realizes that 70% of the Earth is covered with water, and most of us will barely travel the 30% of the land in our lifetime. Some parts of the 30% land aren’t even explored yet, only mapped out by satellite imaging.

EarthDesk: It’s easy to forget that the camera operated remotely. You were busy being a working sailor. Do you recommend the life?

JeffHK: This timelapse piece might have made seafaring seem all rainbow and sunshine, but it is far from the truth. The isolation and disconnectivity are not for everyone, but I personally find the solitude very enjoyable.