This article first appeared in the October 7, 2017 EarthDesk. ~ JC 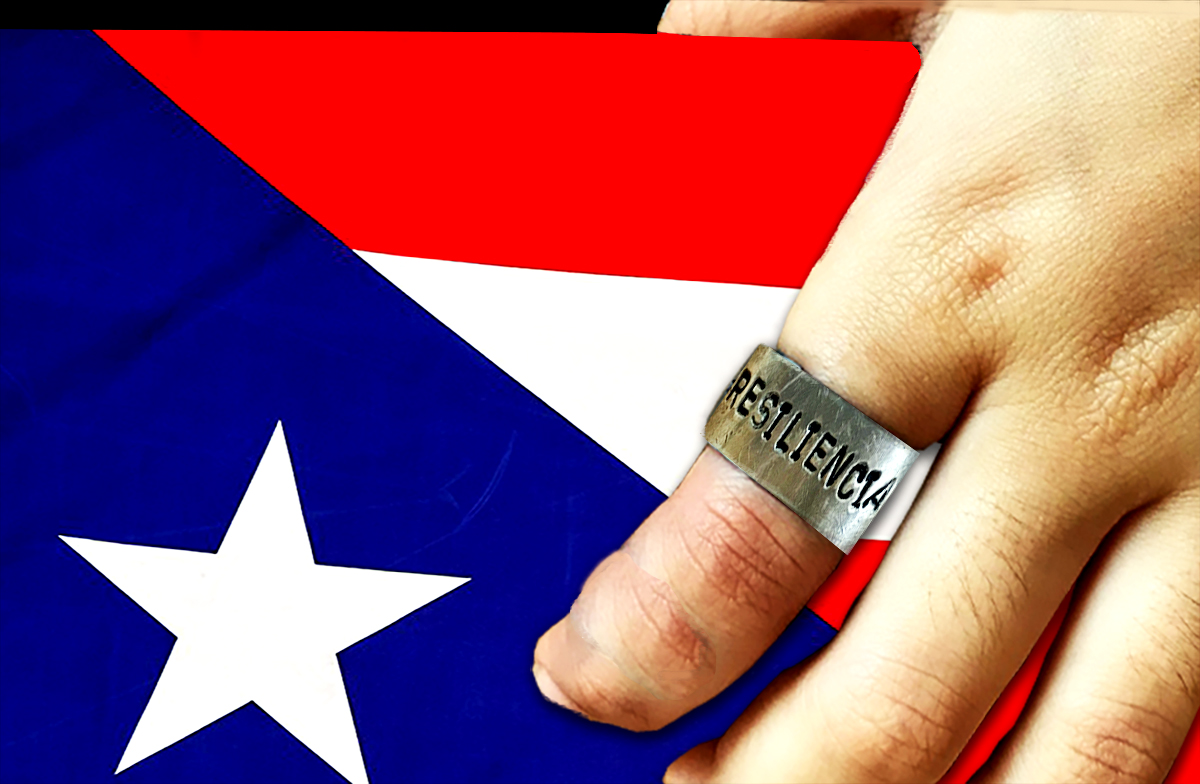 In the days leading up to and after Hurricane Maria, Sarah Gabriella Pereira lived by her cell phone. She had learned the hard way that even a moment’s hesitation might disconnect her from home, thanks to Puerto Rico’s now frail cellular system. She abruptly left her Pace University classes without warning to talk to her mother. “Sometimes I’d see I had a missed call and I would start crying. On my birthday, the day before Maria landed, I received none of my usual family calls.” They were anxiety-filled days.

“Resiliencia” is hand-engraved into the silver ring that every day adorns the left hand of the international management major at the university’s Lubin School of Business. She was unfamiliar with the word when she found the ring a year and a half ago in a display of homemade jewelry back home in the city of Caguas. “It captured my attention,” she said. “When I learned what it meant, I understood. I identify with it.”

Maria began hammering the island on September 20 with 155 mph wind gusts followed by relentless rains, leaving 78 known dead and damages steadily climbing toward $100 billion.  Caguas, in the central eastern part of Puerto Rico, endured more than three feet of rain. Shortages and ruined services have made living conditions dire. Electrical outages are the norm. Like the rest of the island, the local supply chain has been crippled by lack of fuel, damaged highways and logistical confusion. FEMA has come under intense criticism for being slow to respond.

Keeping up with the purchase of everyday necessities has been a challenge. In the aftermath, Sarah’s mother, named Sarah as well, could only withdraw $100 at a time from the local bank teller or the ATM, if it were operational. Lines were long and she had to make her money last. Food has been dear, and neighbors take turns preparing meals for each other. “It is economical. They never know when the money is going to run out.  My mom said she has been eating cereal. They can’t even eat ham and cheese sandwiches because there is no place to store ham or cheese — ice is necessary. They have to stand in line for ice.”

Nearby, a friend’s grandfather lost his house. Sarah’s family home escaped extreme damage because it is sturdily built with concrete, but family members sleep outside now because summer heat and humidity combined with lack of power make indoor living oppressive.

Sarah says resiliencia is integral to Puerto Rican culture and her upbringing, the reason the island and its people will survive and thrive. “We are literally a hopeful and happy people.  Obviously, many back home are desperate now and they have reason to be. But we will do the impossible and have a Puerto Rico that is even better.”

Resilience is also a favored word among climate and security experts, but cold and technical in its application. It is discussed at a distance from disasters — in conferences, meeting rooms, and agency strategy sessions. Resilience is about models that theoretically assure systems are securely in place, responders are prepared to mobilize, and resources are at the ready. That is, until a weather bomb like Hurricane Maria explodes in people’s lives, leaving only human resilience to stand and fight. 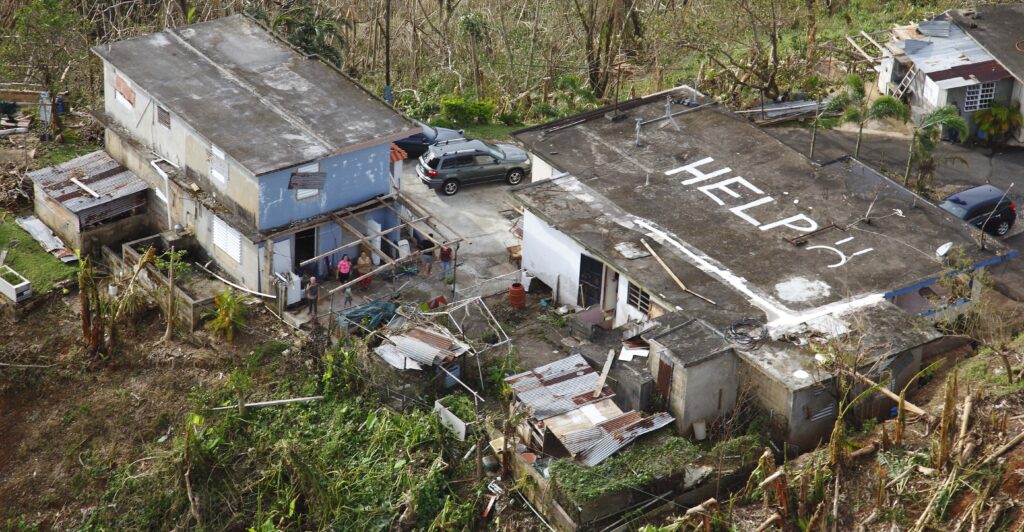 Human resilience, according to the American Psychological Association is “the process of adapting well in the face of adversity, trauma, tragedy, threats or significant sources of stress — such as family and relationship problems, serious health problems or workplace and financial stressors. It means ‘bouncing back’ from difficult experiences.”

The Department of Homeland Security views resilience a little differently, as the ability to “rapidly recover from disruption due to emergencies. Whether it is resilience towards acts of terrorism, cyber attacks, pandemics, and catastrophic natural disasters, our national preparedness is the shared responsibility of all levels of government, the private and nonprofit sectors, and individual citizens.”

But what happens when government and the private and nonprofit sectors fail in their shared responsibility, are rendered as helpless as the grandfather who lost his home, or the family short on food because it hasn’t access to its own money? Sometimes, resilience is not about rapid physical recovery but rapid psychological recovery. Sometimes, resilience is in the eye of the battered, not the planner.

“No matter how much we plan, without human resilience we don’t survive,” said Professor Joseph Ryan, chair of Pace University’s masters program in Management for Public Safety and Homeland Security Professionals. We can’t prevent a hurricane but we can prepare for one. The key is partnerships, not an easily achieved goal.

“When Tom Ridge [Secretary of Homeland Security under President George W. Bush] spoke at Pace University’s first resiliency conference about the 2010 National Security Strategy, he said we will achieve resilience through public private partnerships,” said Dr. Ryan. “The private sector has 90% of the resources and no authority. Government has few resources and all the authority. When I heard this I nearly died laughing. They have no idea what a public private partnership is. And if we are really going to achieve resilience, we need to work together.”

Puerto Rico is challenged on both counts. It is poor in resources with more than $70 billion of debt, and 43.5% living below the poverty line — before Maria. As for government, President Donald Trump is Chief of State of the unincorporated American territory of Puerto Rico and, in keeping with tradition, his administration treats the island like a distant nation. This historical neglect is also a product of presidential particularism, since Puerto Rico casts no votes in presidential elections.

In short, there is no partnership on the horizon ready to make Puerto Rico resilient. According to Dr. Ryan, neither is the U.S. mainland ready. “Nothing meaningful has happened since 9/11. We learned nothing from Katrina. How many communities have more than a week’s supply of medicine? How many people have access to a month’s emergency water supply?”

He cautions not to place the Puerto Rico experience in a box, as if it could not be repeated stateside. Sandy and Katrina approached but did not achieve the dimensions of Maria. Continental communities could yet face disruptions that would dramatically alter life as we know it, for a critically long period. Consider something as routine as an individual drug prescription that could spell life or death . . . and multiply by tens of thousands. Here is a glimpse by my friend Nick Brown, Puerto Rico Bureau Chief for Reuters, from a dispatch he posted a week ago on Facebook:

“Latest from Puerto Rico, where life has devolved into survival mode. Middle class & poor alike spend days choosing which lines to wait on — gas, food & water, or ATM. All can require driving hours and take all day (and, in some cases, are still unsuccessful in the end). For one guy, refilling a prescription meant waking up at 6, getting on a ferry, standing in line for hours, and taking another ferry back — 12 hours later, because that was the only boat scheduled. The narrative from the local and federal government seems to be that improvement is happening slowly but steadily, but the majority of people we’ve spoken to just aren’t seeing it.”

Slowly, distribution of food and supplies is beginning to improve on the island, but the daily struggle for life’s staples continues – water, power, cash, ice, prescription drugs, particularly in the mountainous communtiies, Normalcy is slowly returning to Sarah Gabriella Pereira’s family as well. Her father Rafael, a doctor, is back to work at the nearby veteran’s hospital, and her brothers Rafael and Reinaldo have also returned to work. Her mother, however, is struggling.

“They are learning to live one day at a time,” she said. “But now, since I am not there, my mother is going to be alone in the house. She is the most desperate one, and I worry. They are trying to be hopeful. It is a time to reflect on why we should appreciate our lives. Sometimes, we don’t appreciate the little things. And it’s the little things that are needed now.”

Sarah’s dream for Puerto Rico is indpendence, an island nation built on the resiliency of its people, especially her generation. “Our goal is to defend our rights as Puerto Ricans, our own right to dream. We are Generation R. We are ready. We are resilient. And we will rebuild.”