This article first appeared in the September 25, 2015 EarthDesk. ~ JC 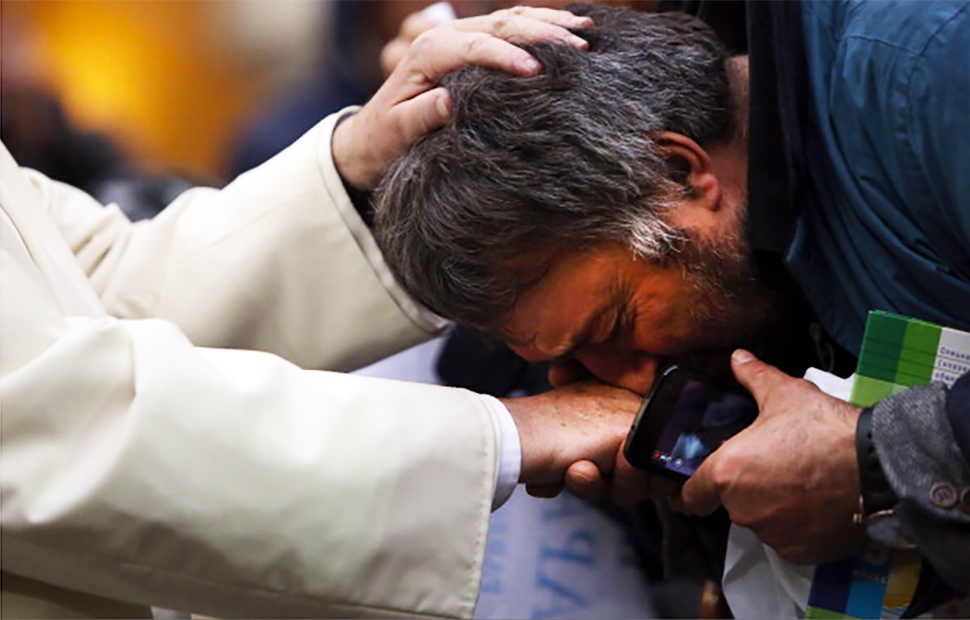 It is a central precept of environmental justice that environmental problems impose the greatest suffering on those who are economically disadvantaged. But Pope Francis raised the stakes in his address at the United Nations today, tracing the persistence of economic and environmental abuse to their common roots:

A selfish and boundless thirst for power and material prosperity leads both to the misuse of available natural resources and to the exclusion of the weak and disadvantaged.

It is axiomatic that abuses such as air and water pollution, toxic facility siting, waste disposal and climate change disproportionately affect the poor.  But the poor are not some class of unfortunates at the tail end of unfair events, Francis tells us. They are the greater victims of wasteful policies he calls “a relentless process of exclusion” :

The poorest are those who suffer most from such offenses, for three serious reasons: they are cast off by society, forced to live off what is discarded and suffer unjustly from the abuse of the environment. They are part of today’s widespread and quietly growing “culture of waste.”

Francis’s theology, also articulated in his May 24 encyclical Laudato Si, speaks of the human and natural environment in one breath:

Our world demands of all government leaders a will which is effective, practical and constant, concrete steps and immediate measures for preserving and improving the natural environment and thus putting an end as quickly as possible to the phenomenon of social and economic exclusion

To enable these real men and women to escape from extreme poverty, we must allow them to be dignified agents of their own destiny.

There is an old theological tradition at work here. Thomas Aquinas, Catholicism’s most highly regarded theologian, wrote in Summa Theologica in the 13th century that Creation itself is incomplete without all species represented, human and nature together:

Goodness, which in God is simple and uniform, in creatures is manifold and divided. Hence the whole universe together participates in the divine goodness more perfectly, and represents it better than any single creature whatever.

Albert Schweitzer was awarded the Nobel Peace Prize in great part for his advocacy and practice of the same cosmology. He wrote in his masterwork on ethics, Philosophy of Civlization:

A man is ethical only when life, as such, is sacred to him, that of plants and animals as that of his fellow men, and when he devotes himself helpfully to all life that is in need of help . . . The ethic of the relation of man to man is nothing but a fragment of the universal ethic.

Environmentalism, for all its accomplishments, is late in coming to such a holistic view. Its narrow, historical focus on nature has made it appear out of touch with the enduring crisis of poverty and its rippling effects. When one speaks of habitat loss in the environmental context, for example, the plight of the human homeless does not come to mind. It should.

There was no mistaking Pope Francis’s message — human and environmental suffering evolved from the same cause and so must be solved with the same moral commitment. Speaking to clients of Catholic Charities at St. Patrick’s church in Washington, prior to a lunch at St. Maria’s Meals with homeless citizens, he said:

I want to be very clear. We can’t find any social or moral justification, no justification whatsoever, for lack of housing.

He could have ended that sentence with “lack of natural habitat” and it would have made as perfect sense.

Often in these pages we have called upon American environmentalism to take on poverty, food insecurity and homelessness as it would a major polluter. More typically, however, poverty is viewed as a cause that will reap trickle-down benefits from large, charismatic environmental issues.

In EarthDesk, September 27, 2014, I wrote about a Facebook reader who resented my complaint that environmentalists too foten ignore the poor. She and others were fighting poverty by fighting climate change, she explained. I replied:

I have heard such propositions often, from seasoned colleagues as well as the young and fervent. It would befuddle America’s 46 million who are living in poverty,  610,000 who are homeless, and 17.5 million who are food insecure, as well as the 1.3 billion citizens of the developing world who suffer from extreme poverty.

Stark though these statistics may be, they do not tell the entire story. Missing is the multiplier effect these populations suffer, domestically and globally: inadequate health care, poor education, civil unrest, political instability, crime, and a pervasive hopelessness that their prospects will ever change.

This chasm between environmentalism and the less privileged is not new. The environmental justice movement was founded to cure it. But, like my Facebook friend, many environmentalists then came to believe that making the world safe for the poor is enough.

In fact, the roots of poverty run deeper and longer than any other planetary issue; their historical grip on human life is as old as civilization itself. Indeed, the case could be made that attacking the economic disparities that cause poverty will have greater benefits for the environment than the other way around.

It is time that environmentalism advocate for the human cause with the same ferocity it has advocated for nature’s cause. It is morally right, and the only path to cut the common roots of injustice that harm equally people and the environment.

Pope Francis made the case during his closing remarks at the U.N.:

This common home of all men and women must also be built on the understanding of a certain sacredness of created nature.

Such understanding and respect call for a higher degree of wisdom, one which accepts transcendence, rejects the creation of an all-powerful élite, and recognizes that the full meaning of individual and collective life is found in selfless service to others and in the sage and respectful use of creation for the common good.